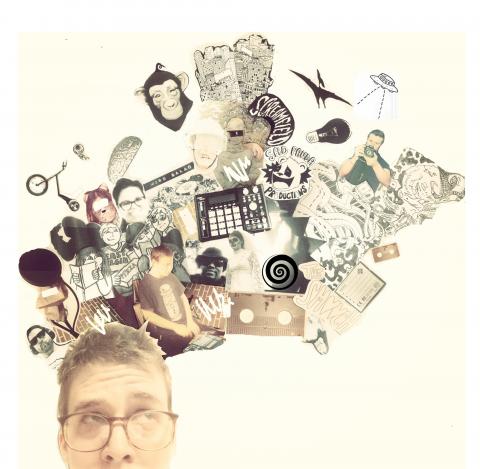 The positive effects of creativity on the brain are well documented. Art, music, dance, writing, and creative endeavours of all types are shown to enhance cognitive ability, relieve stress, and promote self-esteem among many other benefits. It is no surprise then that creativity is an essential ingredient for mental well-being. Because of the efforts of a Malahide resident and a dedicated group of volunteers, residents of Elgin County affected by mental illness now have a new resource to help them express themselves creatively in a positive way.  Out There Creative Therapy is a not-for-profit organization that works to provide programs and events for people affected by mental illness and their communities.

Founder and Director Kellen De Vos is passionate about programming that provides therapy through creativity. Out There Creative Therapy was founded in 2015 and grew out of Kellen’s personal journey and Schizophrenia diagnosis in his twenties. He was always creative growing up and he never stopped creating even during times of struggle. He has found over the years that creativity has been his greatest outlet and a powerful force for bringing people together. He brought together a great team of volunteers and a board of directors who are all as passionate as he is, and who look forward to bringing creativity and well-being to the community.

“It is our philosophy that being mentally healthy isn’t always just talking about mental health but about participating in events and activities that promote mental well-being such as art, music, and comedy,” says Kellen.

Screamfield, a play on the word Springfield, is a Halloween Haunt event that the organization holds at the Malahide Community Place in Springfield each October. Screamfield is the organization’s biggest event of the year. Set design, costume design, and performances are all done by volunteers who have been affected by mental illness in some way – which Kellen reminds us is every single one of us. This fun event is also a great way for the group to start a meaningful conversation about psychosis and Schizophrenia. A Halloween Haunt is an event that you attend knowing that what you are seeing and what scares you isn’t real. “Real” is a word that is talked about a great deal when discussing Schizophrenia as people diagnosed with this often experience things that are not real. Screamfield 2016 will take place on October 27, 28 and 29 and Out There Creative Therapy is already looking for volunteers.

“We really want to cultivate a sense of community this year and are inviting businesses in the area to come out and get involved,” said Kellen. “We want this to be a celebration! We want people to come out and be brave.”

In 2015, Out There Creative Therapy also hosted a fundraiser show called Stand Up for Mental Health at the Port Stanley Festival Theatre. Stand Up For Mental Health is a program started by professional Comedian David Granirer originating in British Columbia. Over the course of twelve weeks a professional comedian teaches people who have been affected by mental illness how to be stand up comedians and after the course is over they do a mini tour. The event was a great way to raise awareness and Kellen is hoping to bring the twelve week course to Elgin County in the future.

Out There Creative Therapy highly values visual art as therapy and hosts an annual art show at Springfield Family Fun Day each summer. The show features art from those who have been affected by mental illness, local Elgin County artists, and students from East Elgin Secondary School. Out There Creative Therapy hopes to expand this program and host art exhibitions at additional locations in the future.

In addition to running its own events and programs, Out There Creative Therapy also works in conjunction with its partner the Canadian Mental Health Association to raise funds for programming in Elgin County. A program particularly important to Out There Creative Therapy is the Prevention for Early Psychosis Program that helps youth in their teens and twenties who have experienced psychosis or have been diagnosed with Schizophrenia. Kellen is a graduate of this program and now volunteers his time as a peer mentor.

For more information about Out There Creative Therapy, to learn about upcoming events and fundraisers, to sign-up as a volunteer, or to participate in programming visit www.outtherecreativetherapy.com or find them on Facebook.